It’s not ideal, and there’s no guarantee it will work at all, but federal authorities are close to issuing rules that could allow marijuana businesses to work with banks again.

That could end the practice of pot cultivators and sellers operating only in cash. Some bankers say assurances from Washington are not enough to change this dangerous state of affairs, but marijuana advocates say it’s better than nothing.

Finlaw said officials expect “maybe not a green light but a yellow light” that would let cannabis entrepreneurs set up bank accounts, use credit and debit cards, and take out small business loans. That’s as far as the Obama administration could go without a change in federal law by Congress.

Marijuana is legal for all purposes under state law in both Colorado and Washington. But it remains entirely illegal under federal law. Banks face prosecution if they do business with customers they know are engaging in crimes, and most banks are subject to federal law because they handle transactions across state lines.

This means most bankers won’t do business with marijuana companies. Those companies and the people who run them are then left to transact only in cash, a dangerous state of affairs that opens them up to armed robberies.

On top of that, the DEA has made it all but impossible for professional security providers to help marijuana providers. And off-duty cops can’t take on security work at pot shops in many areas.

Marijuana advocates have long been calling for a policy that would ease safety concerns without putting bankers in a legally hazardous position. 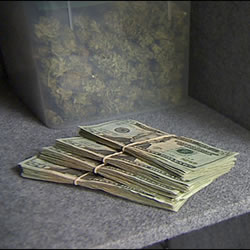 “It’s the best piece of news we’ve heard in quite some time,” said Mike Elliott, director of the Medical Marijuana Industry Group, a Colorado trade organization. “Banking is the most serious issue that is still unresolved. We need answers now for public safety and accountability reasons.”

But some bankers say a new policy, without action from Congress, won’t be enough to prod the industry into working with marijuana again. As long as the threat of federal prosecution exists – even if the government promises not to use it – bankers will be skittish, said Robert Rowe III, vice president and senior counsel for the American Bankers Association’s Center for Regulatory Compliance.

“The fundamental problem remains: No matter what else happens, until Congress changes the law and declassifies marijuana as a controlled substance, any bank that offers products or services to a marijuana dispensary would be subject to prosecution for violating federal law,” Rowe said. “Bankers continue to tell us that the risk from prosecution is still too great.”

The odds Congress will act anytime soon to remove marijuana from its classification among the most dangerous, addictive and medically useless drugs are exceedingly slim, to say the least.