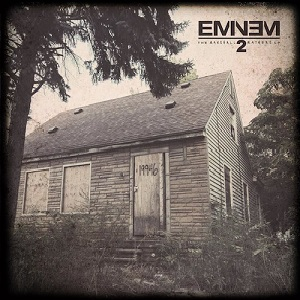 In terms of stoner music, Eminem delivers an incredible amount of rhymes at a dizzying pace, leaving any stoned listener mesmerized. Word about the album looks positive so far, with many comparing the LP to its predecessor in terms of quality. If the new album  actually is anything like The Marshall Mathers LP then we’re in for a pretty amazing musical work.

And that looks like a distinct possibility. The Rolling Stone gave the album four out of five stars saying, “Nostalgia is everywhere… He’s playing his best character, the demon spawn of Trailer Hell, America, hitting middle age with his middle finger up his nose while he cleans off the Kool-Aid his kids spilled on the couch”.

Below is “Rap God,” the third single from The Marshall Mathers LP 2. The song chronicles Eminem’s tenure as a major force in the rap industry, mentioning different conflicts Eminem has seen pass by. What makes “Rap God” worthy of linking? At one point in the track Eminem raps 97 words in 15 seconds. He calls it “supersonic speed,” which is unsurprising considering that’s 6.5 words a second.