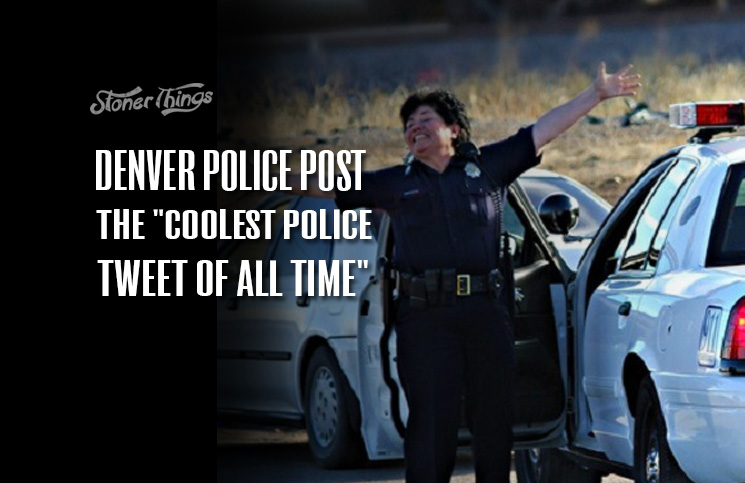 It was not so long ago that the last thing you would have expected from any law enforcement office is an acknowledgment of weed-consuming activities from the public, much less tacit approval. Call it a sign of the changing times, but the Denver police department in particular seems to have taken a more tolerant view of the various herb-related activities in the city.

Although the Denver police department stopped short of actually encouraging users to light it up, the tweet posted on its official account seems to have the right attitude to dealing with the city’s population of weed smokers.

In a decidedly 420-friendly post that numerous heads are now calling the “coolest police tweet of all time”, the Denver PD showed just how in tune they were to both hip-hop and weed culture. Posted at 6:30 p.m. on April 20, 2015, the post enjoined users to consume weed ‘responsibly’ during the next day’s anticipated festivities.  Take a look at the tweet below.

🎶 We see you rollin, but we ain't hatin’ 🎶 HAHA… Seriously though, #Denver, please remember to #ConsumeResponsibly this 4/20 weekend.

Now this tweet in itself may not seem like much, but for those who have kept close tabs on the state of legalization in the United States, those few simple words on Twitter are very significant indeed. As the wave of legalization sweeps across the nation, causing much reform – and some controversy – in its path, it is quickly becoming apparent that law enforcement agencies and personnel have adjusted their attitude somewhat with regard to the herb…well at least some of them have.

While weed tolerance is indeed the order of the day throughout many parts of the United States, there are some sectors that remain firmly opposed to legalization in all forms. Nevertheless, the tweet by the Denver PD is a good sign indeed, and a solid indication that good changes are on the way.

Of course, not everyone was as thrilled at the weed-friendly tweet as the stoner community was. In fact, even some users appeared to be a bit befuddled as to the content and nature of the post, not to mention the rationale behind it. Not a few users who read the post also commented on how similar the DPD post seemed to be to the lyrics of one of hip-hop artist Chamillionaire’s biggest hits. When asked whether or not the post in question was made in reference to Chamillionaire’s massive hit “Ridin”, the response by whoever was manning the Denver PD’s was interesting to say the least: “#PoliceLikeToJamToo”.

Now despite all this, the Denver PD has a job to do, and did it they did, with no less than 160 tickets handed out during the next day’s festivities for various weed-related offenses. Nevertheless, the fact that the policed department issued such a pot-friendly post on Twitter is quite telling, and one would hope that it is a sign of increased tolerance for weed all across the United States, and better things to come for all of us.