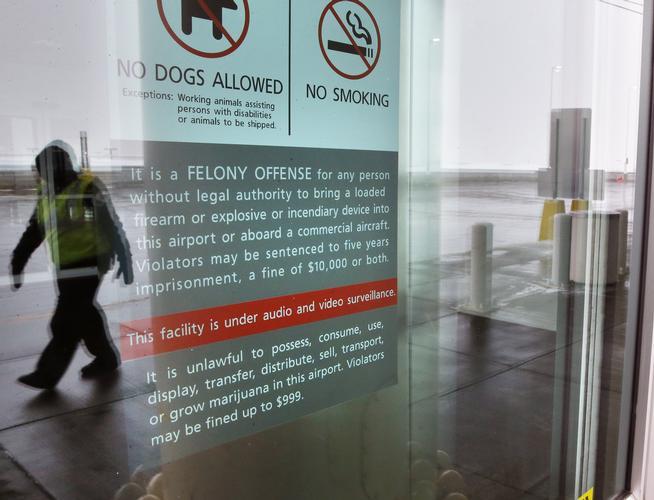 Denver International Airport banned weed on its property late last year, yet since then, less than a dozen people have been caught at security checkpoints carrying the drug.

None of those people received a citation or fine, said Heath Montgomery, a spokesman for the airport. Nor have officials confiscated any marijuana. The 10 people who were stopped trying to bring pot through security cooperated when asked to get rid of it – whether by bringing it back to their cars or throwing it away.

“To have contact with 10 people out of millions passing through, it tells me most people are abiding by the rules and this is not a major issue,” Montgomery said.

The airport is clear about its policy. Numerous signs warn travelers weed is forbidden. The drug is legal under Colorado law, and the airport is a Denver city property, but the federal government oversees the aviation industry, and federal law prohibits marijuana.

It isn’t actually a crime to fly with small amounts of cannabis, as long as you’re taking it from one legal place to another legal place – though good luck getting away with it. Nor is it a crime to carry weed at the Denver airport.

But it is an administrative violation. The fine for a first offense is $150. Subsequent offenses can incur fines of as much as $999. None of the people stopped at security challenged Transportation Security Administration officials.

Many observers are taking the lack of trouble as a sign that tourists are behaving appropriately. Some critics of legal pot worried out-of-staters would come to Colorado, load up on weed, and try to take it with them by any means available.

That doesn’t seem to be happening, at least at the airport. Officials wouldn’t speculate about how many people successfully board planes carrying weed.

Rob Corry, a pro-marijuana lawyer in Denver, said the lack of citations at the airport is probably a good sign.

“It would seem like people are exercising their rights in Colorado and then going back to where they came from and not taking marijuana with them,” Corry said.

The TSA calls local police when they find cannabis on a passenger. Since possession isn’t a crime in Denver, passengers could be issued citations for violating city regulations by carrying it in a banned place.

“The airport prohibits it, but it may not be a criminal offense,” he said. “That’s the right approach.”