While visiting an event hosted by Vicente Fox, the former president of Mexico, the Dalai Lama was asked by a member of the audience how he felt about medical marijuana use.

Surprisingly, he said that the one “exception” to smoking pot is if it is for medical reasons and is legal in the region you’re in. “But otherwise if it’s just an issue of somebody (using the drug to have) a crazy mind, that’s not good,” he added. 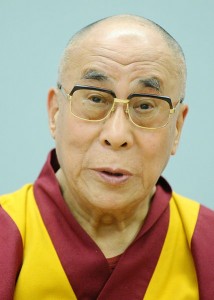 The Dalai Lama is a Tibetan spiritual leader, a practicing monk of Tibetan Buddhism and a major proponent of enhancing the lives of others. The current Dalai Lama is the 14th person to hold the title. He is a Nobel Peace Prize winner for his efforts toward finding a peaceful resolution while still working to liberate Tibet.

With a major spiritual leader condoning medical marijuana it’s possible that mainstream acceptance of cannabis will rise. It says a lot that one of the world’s biggest advocates for peace is in support of smoking weed for pharmaceutical purposes. Whether he actually intends to throw his impressive influence behind the drug remains to be seen, but it’s certainly not the end of the story.