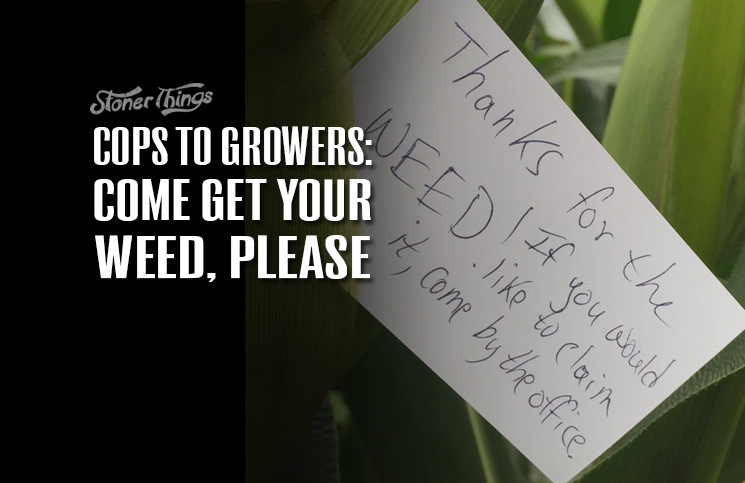 Authorities in a rural Kentucky county are asking some anonymous marijuana growers to get in touch after seizing $600,000 worth of their crop – but it’s unlikely they’ll get a reply.

Using the hashtag #WeGotYoWeed, Grayson County sheriff’s deputies are taunting the cannabis farmers on social media, urging them to stop by and pick up their contraband plants at sheriff’s headquarters. Deputies said they found the marijuana growing in a corn field near the small town of Leitchfield.

The sheriff’s office used the hashtag to announce the bust on Twitter and Facebook in early August. They said they even dropped a note at the scene of the raid in case the farmers return and decide to turn themselves in.

“If it was your marijuana and you would like to claim it, you are asked to call the Grayson County Sheriff’s Office,” deputies said in a Facebook post.

The raid started in late July with an anonymous tip to the sheriff’s office, deputies said. The office joined the Leitchfield Police Department, the Kentucky State Police, and officials at the Grayson County jail to conduct an investigation that led to the marijuana bust.

More than 250 plants were seized

Deputies served a search warrant on the corn farm July 29 and seized more than 250 cannabis plants. The pot was planted in between rows of sweet corn, a common method of hiding illicit grow sites. Stalks of corn had been uprooted to clear room for rows of cannabis near a roadway, deputies said.

“You know this is just a drop in the bucket,” Sheriff Norman Chaffins told local reporters in August. “We know there’s a lot more plants out there, and people have mixed feelings about marijuana grows and whether marijuana should be legal or not. But it’s currently illegal in the state of Kentucky and we’ll continue to enforce those drug laws.”

The sheriff’s department had not announced any arrests in the Grayson County case as of Aug. 8.

What do you think: Any chance the growers will call the sheriff’s department? Leave a comment below.