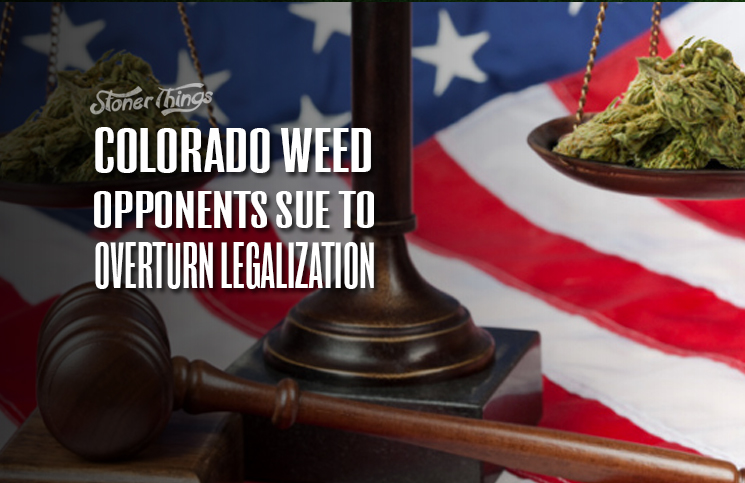 A group of anti-marijuana activists in Colorado have filed a federal lawsuit in the vain hope that they can overturn legalization in the state.

A group that calls itself the Safe Streets Alliance claims in its suit that Colorado is breaking federal law by allowing the cultivation, sale and possession of pot. The state’s voters legalized weed in 2012, as did voters in Washington State, but marijuana remains strictly illegal under federal law.

The suit stands little chance of success, but it’s additional proof that some people are sore losers. Colorado already faces a federal lawsuit filed by officials in Nebraska and Oklahoma, two deep red states that object to legalization.

The legalization opponents seek to overturn the portions of the Colorado marijuana law that allow cultivation, processing and sale of cannabis. Possession of the drug would remain legal, but customers would be forced back to the black market.

That’s exactly the opposite goal sought by reformers, and it could help explain why courts are likely to reject this new attempt at nullification.

Though weed is illegal under federal law, there is no requirement that states go along with the policy. The feds can still arrest anyone anywhere in the United States for violating their laws, but they can’t force state or local police to do it for them.

They also can’t force states to enact specific laws to comply with federal policy. Since a victory for the plaintiffs would essentially force Colorado to adopt federal law as its own, it’s highly unlikely that the lawsuit will get very far.

This is relatively well established law; the kind of law the plaintiffs are unlikely to overturn.

“Because state and local government actions that promote the marijuana industry directly conflict with the federal Controlled Substances Act (CSA), those actions are preempted under the Supremacy Clause of the United States Constitution and must be set aside,” the suit says.

But there’s another part of the Constitution, the 10th Amendment, which gives the states or their people “the powers not delegated to the United States by the Constitution, nor prohibited by it to the States.”

That means the states are free to exercise any powers not granted to the feds or withheld from the states by the Constitution. States are typically given wide leeway in how they enforce their policies, as long as they don’t directly interfere with the enforcement of federal law.

The plaintiffs in the lawsuit, Phillis Windy Hope Reilly and her husband, Michael P. Reilly, claim they were injured by “a conspiracy to cultivate recreational marijuana near their land,” the lawsuit says.