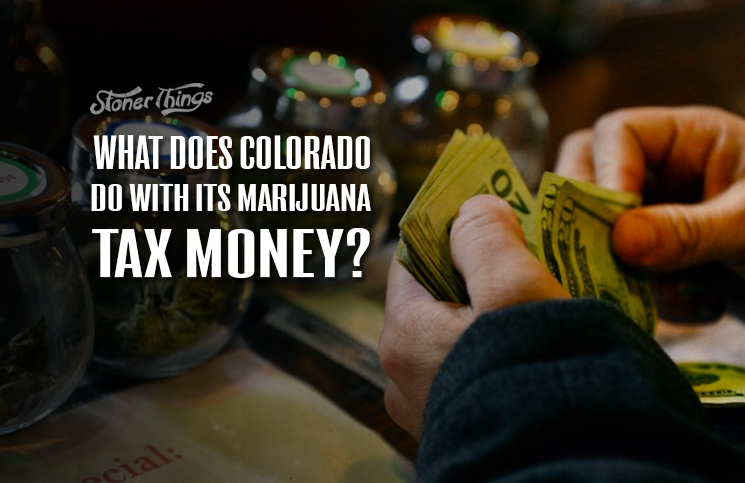 Where does all that money go?

When Colorado voters legalized marijuana for recreation in 2012, they were told a financial windfall was on the way. It was, but now that it has arrived, it may not be quite so impressive as many of those voters expected.

Still, the cannabis tax haul for Coloradans is big: nearly $130 million in cannabis-related revenue flowed into the state’s coffers between 2014 and 2015. That may not seem like much compared to the $10.3 billion in the general tax fund, but it makes up almost 1.3 percent of that amount – quite a lot, actually.

So how does it all work, and what does the money pay for?

There are three state taxes levied between seed and sale, and customers ultimately bear the cost when they buy marijuana at dispensaries. This makes Colorado marijuana more expensive, but it’s still much cheaper than it is on the black market elsewhere.

For example, 1/8 of an ounce of recreational cannabis sells for about $30 in most Colorado pot shops. A wholesale tax is included in that cost, though the exact rate varies with market conditions. At the store, consumers pay a 10 percent special sales tax on cannabis and the state’s general 2.9 percent sales tax. That adds up to a 13 percent sales tax on top of the wholesale levy.

Once those costs are added, the average eighth has a retail value of $34. But many cities, counties, and other local governments also tax legal marijuana. Denver, for one, charges a special 3.5 percent tax on pot sales and a general sales tax of 4.75 percent, adding up to an additional 8.25 percent and driving the cost of an average eighth to $36. But even with stable wholesale rates, average prices vary across the state. And of course, stronger marijuana brings higher prices.

What does all that money pay for?

With marijuana tax revenues totaling $129 million between June 2014 and June 2015, Colorado has enough extra money to tackle at least a few problems. But it won’t be nearly enough to turn the state into the kind of utopia some voters may have hoped for.

The first $40 million of cannabis tax revenue goes toward BEST, a state program that pays for local school construction projects. And that’s enough to make a difference in many school districts, especially in rural parts of Colorado.

Between 2014 and 2015, the state brought in $2.6 million more than that $40 million allotment. All the money goes into a public school fund and becomes part of Colorado’s $5.4 billion annual education budget.

But there’s more: 15 percent of the special cannabis sales tax, or about $10 million, is paid to local governments for their own use. And lawmakers are free to spend the remaining 85 percent of that tax, plus all the 2.9 percent regular sales tax generated from marijuana sales, roughly $77 million, however they want.

Let us know: Is legal pot generating enough tax money for states like Colorado? Or are taxes on retail pot too high already? Leave a comment.