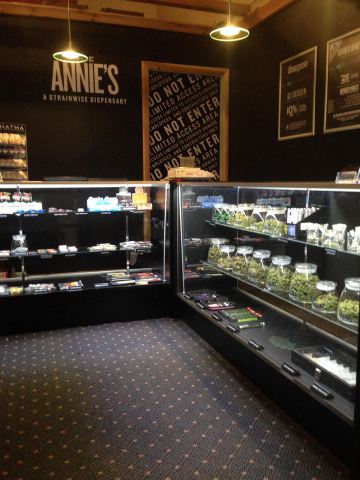 Colorado made marijuana history Nov. 21 when officials issued what is apparently the world’s first license to sell cannabis on the retail market.

The license was issued by Central City officials to medical marijuana dispensary Annie’s, which does business there. Annie’s is owned by a company called Strainwise, which also operates pot shops in Denver, Idaho Springs and Wheat Ridge.

Colorado’s recreational marijuana law, approved by voters a year ago, mandates that only medical dispensaries will be allowed to sell recreational weed for the first few months of the program. After three months, license applications will be open to the general public. 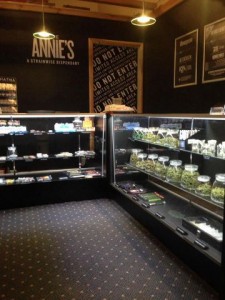 Three of Strainwise’s dispensaries in Denver have been approved for recreational sales, but Annie’s finished the licensing process first.

Central City, located in the Rocky Mountains about 35 miles west of Denver, has a population of about 700. Annie’s originally opened there as a convenience store, then started selling weed to registered patients several years ago.

Colorado was one of two states that voted to legalize recreational pot last year. The other was Washington. Marijuana is expected to go on sale for all adults in Colorado beginning Jan. 1. Washington is further behind in its licensing process; stores there should open later in 2014.

In a sign of just how much things have changed in so many places, the Central City chief of police delivered the license to Annie’s operators. It was a short trip: Police headquarters is right next door.

“Colorado is moving forward and leaving marijuana prohibition behind,” said Mason Tvert, spokesman for the Marijuana Policy Project. “For the first time in history, those who sell marijuana are receiving licenses from the state instead of rap sheets. Marijuana will be sold to adults by legitimate, taxpaying businesses instead of drug cartels in the underground market.”

The license issued in Central City was local, and Annie’s still needs to obtain state approval. But the significance of the license can’t be overstated.

Marijuana has been legal at various times in history. Ancient Eastern cultures used it freely, as did a small subset of Americans up until the early 20th century. It was included in patent medicines in the late 19th century, used to treat everything from insomnia to migraines.

But patent medicines were unregulated until the early 20th century, and even then no licenses were required. And as far as history reflects, no early societies required that hemp growers, sellers or consumers obtain licenses from the government.

Weed was outlawed in America in 1937 by the Marijuana Tax Act. The law required that anyone who grew, sold or prescribed marijuana obtain a license and pay a fee. Users were required to pay $100 per ounce – the equivalent of about $3,000 today. On top of that, licenses were almost impossible to get.

Some grow licenses were issued for hemp production during World War II, but no one ever received a license to sell. And that apparently makes the license in Center City the first of its kind on Earth.