The City of Chicago decriminalized marijuana possession two years ago, yet police continue to arrest almost everyone caught with small amounts of the drug, according to the results of a new study.

Chicago police make arrests in about 93 percent of cases involving misdemeanor cannabis possession, the study found. Overall arrests are down, but the decriminalization policy adopted by the city council has barely made a dent.

The drop in arrests “is not a win,” said Kathleen Kane-Willis, lead author of the study. “I wouldn’t give our city or state a passing grade.” 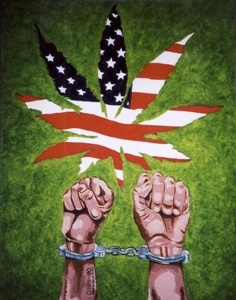 Among other things, the report also found large inconsistencies across Illinois in the way various municipalities treat marijuana violations. In many cases, small-time offenders who should be receiving tickets are going to jail instead.

In Chicago, the city council passed an ordinance in 2012 that decriminalized possession of small amounts of weed. Instead of making arrests, officers are supposed to issue tickets and small civil fines.

The policy has strong support, in the public and in city government. The Chicago Police Department backs the idea, even though it has been almost entirely unable or unwilling to enforce it.

The study, which hasn’t been published or peer-reviewed, found that local and state governments across Illinois have had a hard time implementing legal reforms.

“If we really want marijuana reform, we have to have a consistent policy across the state,” Kane-Willis said. “Otherwise, people end up with different punishments, and the consequences cause more harm. This is not a good way to do policy.”

An arrest, even for an offense as minor as marijuana possession, can irrevocably damage a person’s life. On top of the jail time, fines, probation, and other criminal penalties, there is the stigma that can make it impossible to find a job, open a bank account, or rent an apartment.

Making arrests when they could issue tickets costs police money, manpower, and time – resources the city hoped to save when it enacted decriminalization. Even the police department acknowledges progress has been slow.

“Like any new process, it has taken time to implement the ordinance, and we believe there’s certainly much more work to be done on full implementation,” said Adam Collins, a spokesman for the department. 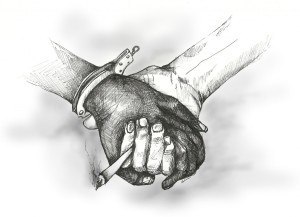 Most possession cases are small, and most of those are eventually thrown out of court, according to police. But tokers are still put through the wringer of the arrest process, and police still waste enormous resources on each arrest.

Minor cannabis possession is a misdemeanor under Illinois law, and penalties vary depending on the amount: Between 10 and 30 grams carries a maximum 1-year jail sentence, while between 2.5 and 10 grams comes with a 6-month sentence, and 2.5 grams or less comes with a 30-day sentence.

But the study found that the actual penalties handed out by local law enforcement depend entirely on where in Illinois a person lives. For example, a toker in Chicago is much more likely to be arrested than her counterpart in neighboring Evanston, where police will likely write a ticket instead.

The study also found Chicago has one of the nation’s worst racial disparities in marijuana arrest rates. Black users are more than seven times more likely to be arrested for simple possession than are white consumers, even though both races use the drug at similar rates.

“In Chicago there is a two-tiered system where police make the decision on an [offender’s] fate, and they mainly decide to arrest,” Kane-Willis said. “That’s not fair, and it doesn’t work to decrease crime.”