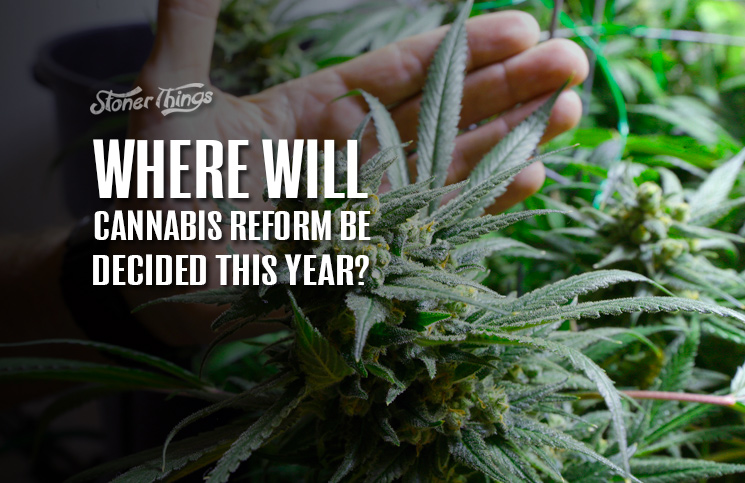 Marijuana could go big time in November, bigger than ever before. As many as 18 states could grapple with the question by the end of the year, and even a few wins could upend anti-cannabis laws across the country.

Of course, few of those states will actually vote on legalization. Some are deep-red places such as Alabama and Oklahoma, where advocates stand roughly a snowball’s chance in hell of making pot legal for any use.

But at least a few of the states probably will act, both on recreational and medical marijuana. So which are the most important? Which of these places would move the needle furthest? And how much impact could they have?

Here are three of the most critical battlegrounds for reform in 2016.

Win California, win everywhere else. That, at least, is the hope. This most populous state in the union is a bastion of marijuana reform and the first to adopt medical cannabis, 20 years ago.

But California is not quite the same as Colorado, Washington, Oregon, Alaska, or the District of Columbia – the five places that legalized between 2012 and 2014. Why? One word: polls.

Public support for full legalization has been climbing for many years, and by 2014 it had topped 50 percent. But advocates felt that still wasn’t strong enough. That year, the Coalition for Cannabis Policy Reform, a national lobbying group made up of the Drug Policy Alliance, the Marijuana Majority, and California NORML, opted to stay out of the fray.

It’s still unclear how right they were. But in any event, efforts at reform failed that election – no doubt in large part because the coalition begged off. That decision alone may have doomed efforts in 2014, though we’ll never know for sure.

But this year is different. Several large statewide groups, including California NORML and the NAACP, are backing legalization in November, as is Lt. Gov. Gavin Newsom and a growing list of public figures. Odds are believed to be very good.

An effort to legalize both medical and recreational marijuana in Ohio went down to humiliating defeat in 2015. Activists behind the push got grabby and tried to use it to create a cultivation monopoly for friendly pot companies. Voters didn’t take the greed well.

They were so disgusted that even while they rejected legalization, they passed another initiative to ban monopolies statewide. The reform plan backfired, in other words.

But that could change this year. It’s not clear whether advocates will get reform on the ballot in November, but they have narrowed their plan to cover only medicinal cannabis. Recreational weed will have to wait for another day.

This is a smarter approach, at least in this part of the country: No state anywhere has even tried to legalize both MMJ and recreational legalization in the same election. It’s a stretch for any state, but especially a political swing state without the staunch voter support of places like Colorado and Washington.

Even without a vote for full legalization, success in Ohio this year could prove that reform can sell in decidedly purple states. And that could speed up legalization everywhere.

As in Ohio, the push in Florida is strictly for medical marijuana. But it would still be a major step forward: The state already allows MMJ, but only in highly limited circumstances, and then only if the cannabis doesn’t get patients high.

Florida faced the same question in 2014, and medicinal marijuana won wide support at the polls, 58 percent. But the state requires a 60 percent vote to amend its constitution, and that year voters came up short.

Still, support has only grown since then. It’s not clear when Floridians will come around to approving complete legalization, but with every vote, the odds increase – as they do elsewhere.

Tell us: Which states do you think will legalize marijuana in 2016? Do you live in one of them? Post a comment below.