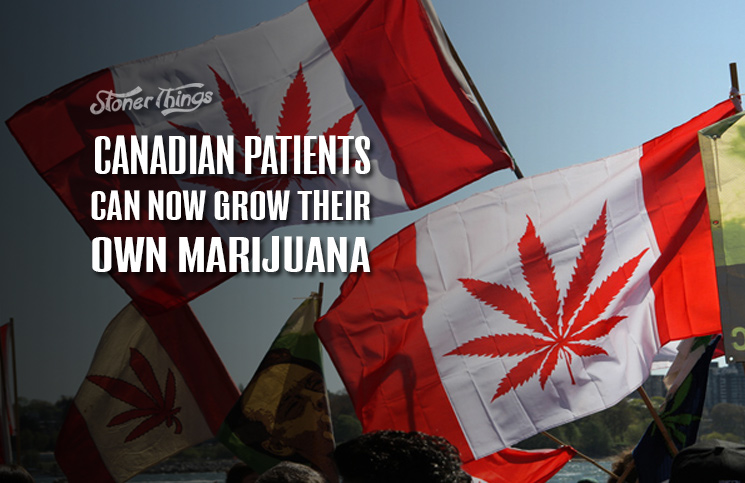 There’s more good news for medical marijuana patients in Canada: The government has lifted rules that barred users from growing their own cannabis plants at home.

Under the new policy, announced in August, patients will be allowed to grow up to two plants outdoors or five inside. Outdoor grows typically produce bigger yields than indoor gardens.

The previous ban never stopped many tokers, whether legitimate patients or recreational users, from cultivating their own plants, but it did put them in a bind. Because they were obtaining their cannabis illegally by growing it, they weren’t allowed to submit it for quality testing at government-regulated labs.

Political leaders considered that a critical problem, since marijuana is medicine in all of Canada and legally subject to quality and safety rules. If users can’t test their supply, they have no way of knowing whether it contains toxic mold, pesticides, or other contaminants. The new rules let patients cultivate cannabis on private property but also open public access to labs.

The decision removes both legal and practical barriers to safe, effective medical marijuana. Medicinal use of the drug has been legal in Canada since a Supreme Court ruling in 2000, but the former government of Conservative Prime Minister Stephen Harper tried repeatedly to prevent it.

Harper and his rightist majority were swept out of power last fall by the Liberal Party, and incoming Prime Minister Justin Trudeau announced plans to legalize cannabis as a recreational drug next year. It would make Canada the second and largest nation to allow pot for any adult use; Uruguay, a much smaller country, legalized the drug in 2013, but it is not yet widely available.

A government official said in August that the decision to allow home marijuana cultivation was made in part because of the proliferation of cannabis dispensaries that police consider illegal. These shops are growing especially common in Toronto and Vancouver, driven by impending legalization. Without access to testing, patients have no way to judge whether the products sold by these storefronts are safe or effective.

“In recognition of the health and safety value of testing, the department is currently working to enable registered persons to access testing services for their own dried or fresh marijuana or cannabis oil,” Health Canada spokesman Eric Morrissette told The Globe and Mail by email. “This would enable individuals to have more information about the potency of the strains they are producing (i.e. THC and CBD levels), as well as information about any contaminants (e.g. heavy metals, microbial) or residues in their product.”

Patients were allowed to grow at home in the aftermath of the 2000 court ruling, but Harper’s government later banned the practice and forced patients to buy their medicine through a handful of government-approved producers. This cannabis is often weak, noxious, and of limited medical value.

Illegal dispensaries are supplied mostly by home cultivators whose plants remain legal under licenses awarded before Harper’s policy. Officially permitting private gardens ensures more of this supply will be tested before it reaches dispensary customers.

The government’s decision to again allow home grows stemmed from a 2014 lawsuit challenging the constitutionality of Harper’s rules. Lawyer Kirk Tousaw, who won the case against the government, called Trudeau’s actions a “robust response.”

“I am very pleased that my well-earned pessimism and cynicism about the government’s medical cannabis actions have proven to be wrong with the new Liberal government,” Tousaw said.

Let us know: Would you rather smoke pot you grow at home or buy in a dispensary? Why? Leave a comment for us below.