Few things mix quite as perfectly as marijuana and the outdoors. Mountain vistas, scenic beaches, verdant forests – they’re all just great for sparking a blunt and watching nature do its thing. 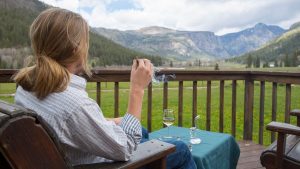 Sadly, that’s not an easy task in America. Most sizable parks are public, and good luck finding a public park that allows you to toke.

Indeed, marijuana is explicitly banned in all national parks, monuments, and recreation sites. Possession on park property is a federal offense punishable by jail time and serious fines.

So what to do? A group of Colorado entrepreneurs think they have the answer: cannabis camp. Actually, their new venture is called CannaCamp, and it’s about as luxurious as the world of marijuana gets.

The cost starts – starts – at $395 per night. Thankfully, MaryJane Group, the company behind the camp, no longer enforces a three-night minimum rule. And there are plenty of amenities to go with that price tag.

“We’re bringing an element of luxury to that adventurous, exploratory vibe of childhood summer camp — in a beautiful setting where visitors can enjoy marijuana in a safe, comfortable, social environment,” said Joel Schneider, CEO of the MaryJane Group.

If the word “camp” conjures memories of seedy lakeside cabins and primitive fire pits, replace that image with one of plush lodgings, unbeatable natural surroundings, and the freedom to toke almost anywhere you please.

The “almost” refers to a rule that forbids smoking in the well-appointed cabins. But balconies are fair game. Toking is allowed pretty much everywhere else – on hiking trails, during yoga classes, paddling on the lake. Take a J with you deep into the woods and relax while you wait for Bambi to trot by.

There’s something for everyone

CannaCamp covers 170 acres on a former ranch near Durango, in southwestern Colorado. Reservations for the summer season are open, though there are just nine cabins available. The season runs from July through October.

Unfortunately, CannaCamp doesn’t provide the weed. There are dispensaries within driving distance, though, and a camp concierge will suggest the best strains and the food they pair with.

As for the ban on cabin toking, the MaryJane groups says it wants to encourage a communal experience rather than solitary smoking sessions. If they wanted, they could allow smoking in some of the rooms under Colorado’s clean air laws, but they don’t plan to do that.

Obviously the camp is centered around the marijuana experience, but it also provides attractions for people who don’t use cannabis. The offerings, Schneider said, “are extensive enough that even friends and companions who aren’t interested in the cannabis lifestyle will also enjoy this special retreat.”