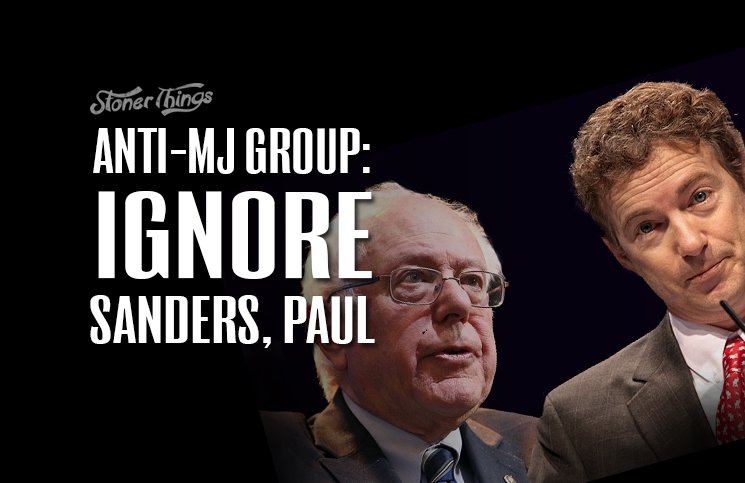 Election Day 2016 is roughly a year away, but candidates are already staking out clear ground on drug policy reform. One candidate has come out in favor of full legalization, while another follows a libertarian philosophy friendly to the idea.

Now a major anti-weed group has launched a push to defeat Kentucky Sen. Rand Paul, a Republican, and Vermont Sen. Bernie Sanders, a Democrat. It could have the opposite effect by sending reform-minded voters their way, but that doesn’t seem to have occurred to the people at Project SAM (Smart Alternatives to Marijuana), the group behind the anti-cannabis campaign.

Project SAM is led by two of the most influential weed opponents, former U.S. Rep. Patrick Kennedy and lobbyist Kevin Sabet. They actively fight efforts to reform drug laws anywhere in the United States, insisting marijuana is as dangerous as alcohol or heroin and should be banned everywhere.

Sabet and Kennedy evaluated candidates in both parties based on their “opposition to marijuana legalization for recreational purposes,” their “support for prevention, intervention, and treatment of marijuana use,” and the “regulated, FDA-approved approach to the legitimate medical use of marijuana components.”

Drug warriors frequently complain that weed should be evaluated by the FDA, like prescription medications, before patients may use it to treat their symptoms. The problem with that approach is that the Controlled Substances Act and the listing of pot under that law’s most restrictive category make it impossible to submit MMJ for FDA review. Groups like Project SAM want to keep it that way by blocking efforts to reschedule the drug.

The group gave Sanders and Paul each a grade of D-, their lowest ranking for any candidate. If anything, the two may take that as a sign they’re doing well, since weed is sure to be a central issue in the election, and polls show support for reform is high.

Paul and Sanders make handy targets for the drug war crowd. At the first Democratic debate, in October, Sanders said he would vote for legalization in Nevada next year if he lived there. Later in the month, he said he wants to reschedule cannabis, which is currently listed under the CSA alongside heroin and LSD.

Paul: Leave it to the states

Paul, on the other hand, has said he thinks states rather than the federal government should decide whether pot is legal. That position fits with Paul’s libertarian leanings and his support for states’ rights issues. Paul was already considered a long-shot for the GOP nomination, and his hopes are sinking by the day, but Sanders has at least some hope of capturing the presidency.

Project SAM didn’t unload on every candidate; they had favorites, too. Florida Sen. Marco Rubio, a Republican, scored an A despite his refusal to say whether he has tried marijuana (you know he has), as did New Jersey Gov. Chris Christie and surgeon Ben Carson, both Republicans. Carson has promised to “intensify” the war on drugs, while Christie opposes medical marijuana in his state and has vowed to stamp out legalization nationwide.

Businesswoman Carly Fiorina, meanwhile, got a B even though she has taken a firm position against legalization. Her sin: acknowledging that cannabis might have medicinal value. Former Secretary of State Hillary Clinton received only a B-, in part because she has tempered her opposition to recreational legalization by saying she’ll keep an open mind.