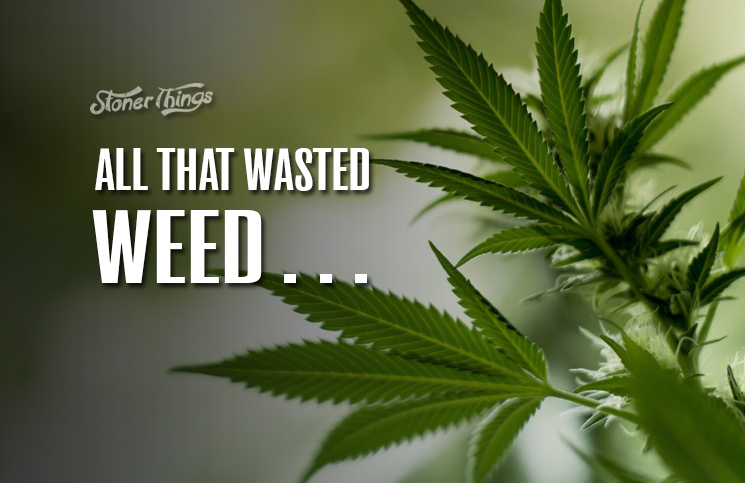 Easily one of the worst parts about major drug busts is that all that great weed inevitably goes to waste. Plants are uprooted, bales stashed in secure warehouses are forgotten, and endless tons are burned off in police bonfires before anyone can put it to good use.

Granted, most pot makes it to its destination unmolested. If it didn’t, you wouldn’t be smoking the stuff as you read this (and yes, we know you’re high right now). But sometimes things go horribly wrong and vast amounts of high-grade grass go up in smoke – smoke no one will ever inhale.

Or sometimes, as happened in Texas in July, the weed ends up all wet. Authorities in South Texas said a man drove a minivan with more than 1,000 pounds of cannabis into the Rio Grande River as he fled Border Patrol agents. The man did not make it to the Mexican side and was arrested by American authorities.

His name was not immediately released, and Border Patrol officials did not say whether he is a U.S. citizen or Mexican national. Nor did they release any information about where the man was allegedly taking the pot.

But they said agents approached the minivan after spotting it driving away from the river into Texas. The driver immediately turned around and sped back toward the Mexican border, authorities said. But he was hemmed in by the river with no access to a crossing.

So, sadly, he drove the minivan into the river, and all that weed went to the bottom. Border Patrol officials said agents helped the man out of the water and arrested him. The agency didn’t say where he was being detained or whether he would be processed for deportation.

After taking the driver into custody, border agents discovered the vehicle was packed full of marijuana bales. They dragged the minivan from the river and kept the pot as evidence. And that is the closest anyone will ever get to smoking it.

Authorities said they recovered about 1,000 pounds of cannabis (dried, presumably) in eight bales and valued the product at more than $800,000 on the street.

Drastic efforts to smuggle weed are common along the Mexican border. Traffickers have tried to drive a marijuana-filled SUV over a border wall, disguise pot as a truckload of melons, and smuggle the drug through miles-long tunnels from Mexico into the United States.

It’s worth remembering that drug cartels are violent criminal organizations and that fighting them is generally a good thing. But anti-smuggling campaigns are a decidedly ineffective way to do this. Legalization would open up a massive domestic U.S. market for cannabis, which in turn would deprive cartels of their illicit American market. It’s simply a smarter approach.

What do you think: Where do you get your pot from, California or Mexico (or somewhere else)? Do you think it makes a difference? Leave a comment below.