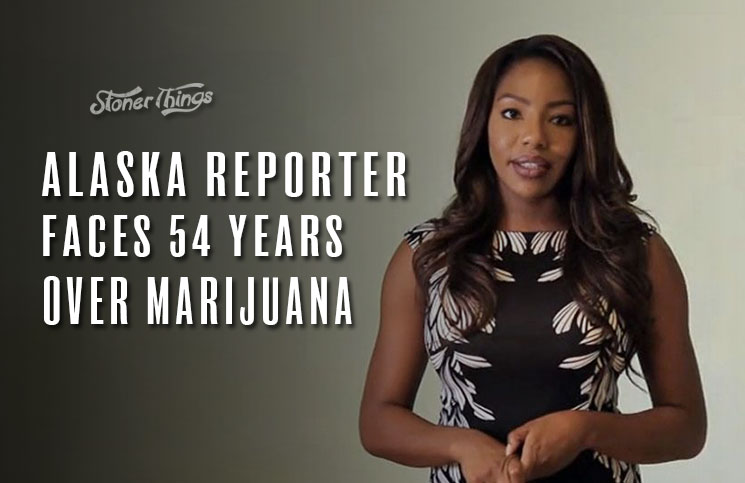 Former TV reporter Charlo Greene went viral in 2014 when she announced during a live broadcast that she was resigning to run a cannabis club she had secretly opened. “Fuck it,” she famously said before walking off the air. “I quit.”

Marijuana is legal for any adult use in Alaska, where Greene worked at Anchorage TV station KTVA. But lawmakers have been slow to license retail pot shops, leaving tokers no legal place to use the drug and driving advocates such as Greene to help them.

That good deed could land her behind bars for most of the rest of her life.

Greene faces a maximum sentence of 54 years in prison on drug charges that were filed this year. They include 14 counts of “misconduct involving a controlled substance,” a felony.

“It’s almost dizzying when you try to make sense of it,” Greene said in October. “It could literally cost me the rest of my adult life.”

Alaska voters legalized marijuana in a 2014 statewide vote, but rules enforcing the new law have yet to take effect. The state has issued 17 licenses for retail cannabis businesses, but none have opened. In the meantime, police have repeatedly cracked down on clubs like Greene’s.

Racist roots of the drug war

Activists decried the charges and potential sentence, saying they reflect racist police policies and the failed strategies of the war on drugs. Enforcement of anti-cannabis laws has long fallen hardest on people of color; Greene is black.

The former reporter, now 28, quit her job during a live segment about a local cannabis club where marijuana smokers could gather away from their homes. The club accepted donations from members in exchange for marijuana, an exchange police view as illegal.

Greene admitted during the broadcast that she owned and operated the Alaska Cannabis Club. She said she would put “all of [her] energy toward fighting for freedom and fairness, which begins with legalizing marijuana here in Alaska. As for this job, well, not that I have a choice, but fuck it, I quit.

While marijuana is legal for adult recreational use throughout Alaska (as it is in Oregon, Washington, Colorado, and the District of Columbia), retail sale of the drug remains prohibited; so does commercial cultivation. Greene said she wanted to give users more options.

But police raided the club after undercover officers bought cannabis there. Legal observers say it’s unlikely Greene will face the full weight of the charges against her, but even a relatively light sentence would play into the perception that state officials have no inclination to honor the legalization vote.

It’s an unusual case in Alaska. Pot has been decriminalized there since the 1970s, medical marijuana was approved in 1998, and full legalization passed by a healthy margin in 2014. Libertarian tendencies are strong in the sparsely populated 49th state, and support for marijuana reform runs deeper than in most other parts of the country.

But the lack of new regulations means stoners have no legal way to obtain the drug short of growing it at home. That has left many confused about the drug’s status and their right to buy it.

Greene pleaded innocent to the charges and expects to go to trial. Observers said her case is more similar to unlicensed sale of alcohol than any type of serious felony, making it unlikely a judge would give her a multi-decade prison term. But the very fact that it could happen is troubling enough.

“It casts a cloud over every laugh and every triumph and everything that I’m building and looking forward to,” Greene said.

Tell us what you think: Should Charlo Greene get a legal pass for selling marijuana, since it is now legal in Alaska? Leave a comment.