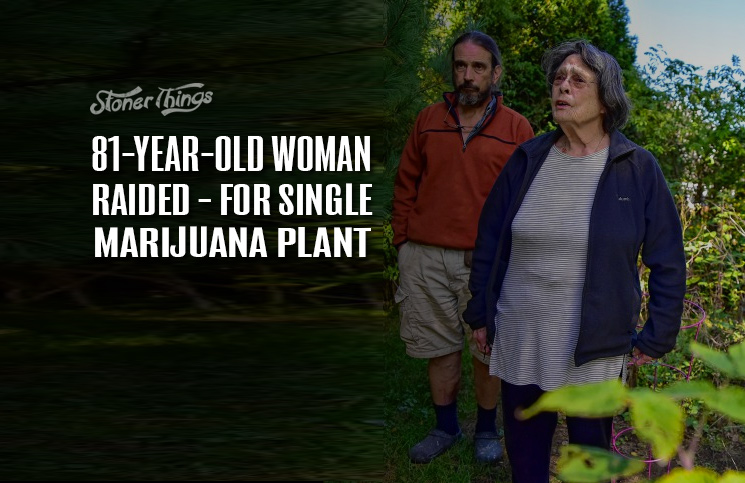 In one of the dumbest, most wasteful, and least productive marijuana busts on record, Massachusetts State Police officers raided the property of an 81-year-old woman in September, just so they could seize a single illicit cannabis plant.

Margaret Holcomb, who lives in Amherst in Western Massachusetts, said she was growing one marijuana plant in her backyard garden, tucked between raspberry plants. She uses pot, she said, to treat advancing glaucoma, arthritis, and insomnia.

The cost and inconvenience of getting a medical marijuana card were beyond her, Holcomb said, so she grew her plant covertly. But it came as a shock when she realized what authorities had done.

A team of state police officers and members of the Massachusetts National Guard swooped down on her property Sept. 21, bringing a helicopter, several police vehicles, and a number of state troopers to raid her yard. They uprooted the plant and took it away in a pickup truck.

The raid was one of several that day, said State Police spokesman David Procopio. All told, officers collected just 43 plants from multiple properties. The smallest busts netted only one or two plants each, while the largest came away with 20 plants, far from a viable commercial grow.

None of the property owners were charged with a crime, Procopio says, making it unclear why the raid was launched in the first place. The busts, he said, were coordinated by the DEA’s Cannabis Eradication Program, which pays states to uproot as many plants as they can.

A DEA spokesman insisted that states ultimately decide how to spend the money, not the federal government. But anti-drug efforts involving both state and federal police agencies typically take their lead from the DEA.

The Cannabis Eradication Program aims to “halt the spread of cannabis cultivation in the United States.” The DEA makes no exceptions for medicinal pot, unlike police in places where the drug is legal under state laws. And even there, authorities sometimes bust legitimate patients.

The program is drawing increasing push back from lawmakers who say it’s a waste of money and police resources. But it has never been terribly popular: By the mid-2000s, even the DEA admitted that most of the pot it seized is “ditchweed,” or wild marijuana plants unsuitable for psychoactive use.

Though he has no medical marijuana card, Jackson said he didn’t think his small garden would raise any concerns.

“I figured what I was growing was such a small amount, what the hell was the big deal?” he said.

Tell us what you think: Will raids like this continue if Massachusetts voters legalize cannabis Nov. 8? Leave a comment below.