Despite the many new and innovative ways to ingest marijuana, smoking remains the most popular. There are many reasons for this, would simplicity, ease, convenience, and effectiveness being the foremost. To put it plainly: if you want to get high and you want to get it done as quickly and as efficiently as possible, smoking is the best way to go about it.

Even if you simply opt for smoking, there are a number of implements that you could use. Each has its own advantages and disadvantages, and they are all certainly worth looking into at least for the experience. 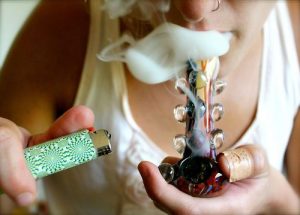 Pipes are some of the most common implements for smoking marijuana. For simplicity and ease of use, they are generally pretty hard to beat. All you have to do is to pack it up with your weed of choice, light it up, and take a puff or two. No muss, no fuss, and only the pure smoke from your bud without the harsh flavor of burning paper. These come in a variety of designs and Matsuya, with glass, wood, and metal being the most common.

Water pipes are a more complex variation of the handheld pipe. Some of the more common varieties are bongs and bubblers, although there are other designs that work off the basic premise as well. Pipes in this category feature a bowl and a downstem, which course the smoke downward through a chamber filled with water. The smoke then bubbles up through the water’s surface and is inhaled by the smoker through the mouthpiece. Although the water does cool the smoke somewhat, its ability to filter out harmful toxins is doubtful. 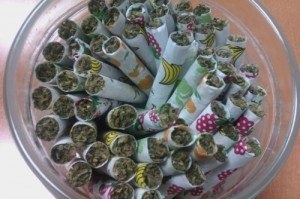 After pipes, rolling papers are probably the most commonly used implements for smoking. Marijuana is rolled into cigarettes called joints. There are many different ways to roll joints, from simple, straightforward cylinders, to cones and more ornate cigarettes. The paper itself can be made from a variety of materials including hemp, bamboo, and rice.

Blunts are variations of the joint; instead of rolling paper, the marijuana is wrapped in cigar wrapping, which is made from tobacco leaves.

Most commonly associated with the smoking of shisha, which is 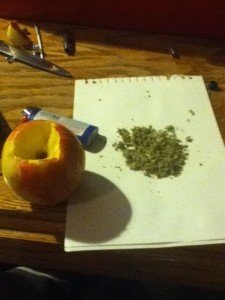 basically wet tobacco, hookahs aren’t quite as common as other smoking implements. Because hookahs do not contain very much water, it can cause marijuana to burn too quickly. For this reason, these devices are rarely used for smoking marijuana on its own. Instead, the marijuana is commonly mixed with tobacco, which may be a source of concern for people who would rather smoke only marijuana without the negative effects of tobacco smoke.

This is the catch-all category of all smoking implements, where devices are made on-the-spot and discarded after one use. Some of the most common smoking devices in this category are apples dug out to form a pipe, soda cans with holes punched through them, and aluminum foil fashioned into a pipe. These pipes are generally for emergency use only, as their effectiveness and safety leave much to be desired. 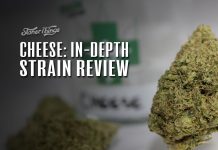