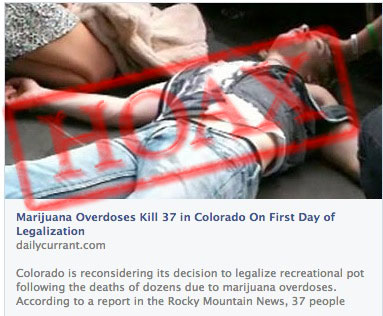 Hopefully you didn’t fall for it. If you did, you clearly know nothing about marijuana – and probably have no reason to visit this site.

But thousands of readers were apparently taken in by a satirical news item making the rounds. The story, published by a smallish Web site known for its Onion-like parodies of real news, claimed 37 people died of “marijuana overdoses” during the first day of legal pot sales in Colorado, Jan. 1

“Colorado is reconsidering its decision to legalize recreational pot following the deaths of dozens due to marijuana overdoses,” the article began. 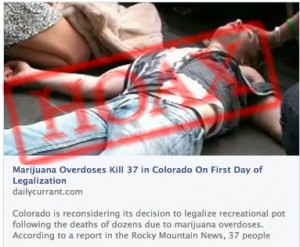 The Currant has posted many fake stories in recent years, more than a few of which have fooled readers, politicians and journalists around the world. There was the story, for example, about Nobel Prize-winning economist Paul Krugman declaring bankruptcy. Or the piece that claimed Michele Bachman wanted to ban falafel in public schools. Or the one that said gay-hating Rick Santorum was on Grindr.

This one is a doozy, however. Readers have been piling on on Twitter, expressing their outrage that Colorado’s legalization experiment has gone so horribly wrong. The issue has generated tens of thousands of “likes” on Facebook.

“I saw this coming a mile away,” Angela Rossillo wrote on Twitter. “As you all know I do not follow [the mainstream media], and don’t necessarily believe THIS article…” said Angela Rossillo.

Another tweeter, Bryan Tann, wrote: “So do we blame pot, or do we blame the users? Do you blame alcohol for alcohol related deaths including DUI, or…”

And a user going by the handle Choy_Facts tweeted: “Really getting tired of all these op-eds in the NYT espousing the virtues of #marijuana. FYI 30 people here died today thanks to #weed.”

Of course, as anyone familiar with weed could guess, nobody died on opening day. Nor were there any reported cases of serious illness or injury. In fact, the day went just swimmingly, according to state officials. But don’t tell that to the die-hard, misinformed opponents of everything green.

The facts aren’t on these peoples’ side. Not only did no one die New Year’s Day, no one has ever died from a marijuana overdose or from side effects of marijuana. Ever, in the recorded history of medicine.

Weed is widely considered much safer than alcohol. It leads to far fewer highway fatalities, causes far fewer hospital admissions, and even aside from overdoses, contributes to dramatically fewer deaths.