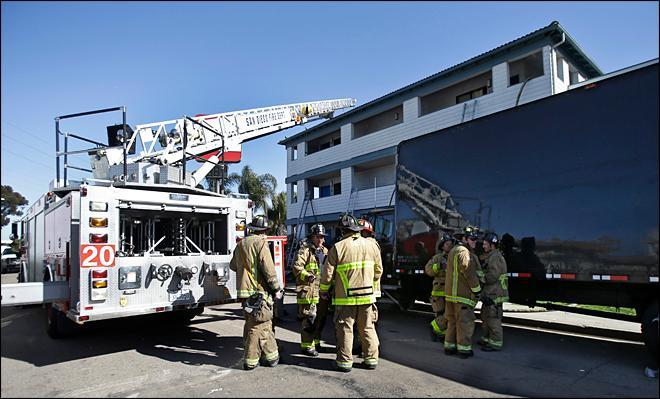 The blast was caused by butane gas used to extract so-called “honey oil” from dried cannabis, said Mark Watson, spokesman for the Denver Fire Department. Watson said the explosion occurred at 12:44 p.m. while workers were applying butane to weed behind a building in southwest Denver.

“We heard these booms,” said Cindy Gilmore, who works in a building next door. “A big ball of flame was coming out the back of the building.”

Gilmore said there were 10 booms, and she then saw a group of people leave the building, get in their cars, and drive away before firefighters arrived. Three people were taken to the hospital suffering second-degree burns, according to the fire department.

Firefighters quickly extinguished the blaze, Watson said. Plants that were growing outside the building were destroyed. Police seized about 36 plants from inside the building, he said.

Authorities didn’t release the name of the growing operation but said it claimed to be a medical marijuana co-op. Watson said charges against those involved could include arson and fire code violations.

Honey oil is a potent, popular, and valuable extract of marijuana. It’s high in THC, it’s easy to make, and more people are doing it, from home extractors to mass producers.

But there’s a big problem: Extracting the oil, or resin, from cannabis requires a solvent. Usually it’s done using butane. And butane is highly flammable and combustible.

To make honey oil, bud is placed inside a cylinder with caps on both ends, similar to a length of PVC pipe. A filter is placed in one end of the pipe. Butane is inserted through a small hole on the other end.

When the canister is full, a yellow resin will pour out of holes in the filtered end. This is the THC oil. The butane that has stuck to the resin is then boiled off using hot water.

This process must be done in a well-ventilated area, away from any kind of ignition source – a cigarette, a match, a pilot light, anything – that could spark the butane in the pipe. It should never be performed indoors or close to a building.

Yet many entrepreneurs do manufacture honey oil inside, where ventilation is poor and the risk of ignition is high. A number of successful extractions may lull a producer into a false sense of confidence – explosions have killed or wounded several seasoned extractors.