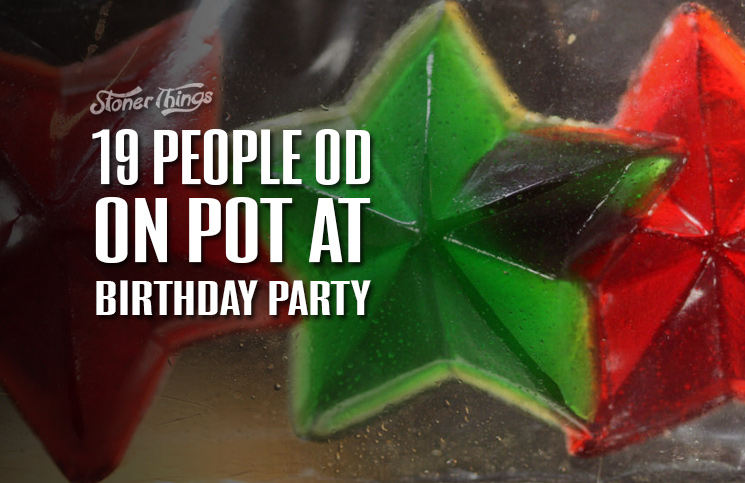 The victims, both adults and children, were poisoned when they unwittingly ate the pot candies at a ‘quinceañera’ party Aug. 6 in San Francisco. A quinceañera is a coming-of-age celebration for 15-year-old girls in Latin culture, especially the Mexican American community.

All of the 19 people were treated at local hospitals for rapid heart beat, dilated pupils, hypertension, dizziness, fatigue, nausea, and confusion. These are all common symptoms of marijuana overdose, according to officials at the city’s Department of Public Health.

Marijuana use is never fatal

Cannabis does not cause serious or permanent health problems, even when consumed in excess. It is possible to overdose on the drug, and even to require hospitalization, but a pot OD is never fatal or life-threatening. All the San Francisco victims recovered within a matter of hours and were released two days after the party.

Most of them were children, authorities said, with ages ranging between 6 and 18 years old. The other six victims are adults, officials said.

“If these candies are confirmed as edible marijuana, then this event is a strong warning about the dangers of edibles, which can be very potent and hard to control dosage in the best circumstances,” said Dr. Tomas Aragon, a health officer for San Francisco. “A situation like this, where they were consumed by unsuspecting people, and many children, is greatly concerning.”

It wasn’t immediately clear how the victims came to eat the candies, though it’s unlikely they all knew the gummies were infused with THC. Health officials have long complained that certain cannabis edibles, especially gummies and other candies, pose a threat to kids who can’t distinguish them from real sweets.

All the overdose patients were attending the girl’s party in the Mission District, the Los Angeles Times reported. They ate the candies at some time Saturday evening, authorities said. Officials at the Alameda County Department of Public Health announced they would investigate the Oakland business that catered the quinceañera. The company was cooperating in an effort to trace the source of the gummies, the health department said.

Authorities determined the overdoses were caused by marijuana after testing 12 of the victims for the presence of THC; each test returned positive results. Final results confirmed that finding.

“This could have been a much worse situation than it was, and I’m glad that all the children that ingested the candy have recovered,” said Mayor Ed Lee.

Lawmakers in states with legal marijuana have complained about the risk of THC gummies in recent months. Colorado has adopted rules that require tight packaging and labeling and could soon move to outlaw weed gummies outright.

Leave a comment below: Do you think states should crack down on marijuana gummy candies? What can authorities do to prevent overdoses?