As a stoner, there are probably very few things that you wouldn’t eat. Right after smoking that fat blunt or hitting that huge bowl, most everything short of a rubber boot can look pretty darn appetizing. That being said, there are certain foods that are just wrong no matter how stoned you are. Here’s a list of 10 foods that you most people would only consider chomping on if they were absolutely zonked. 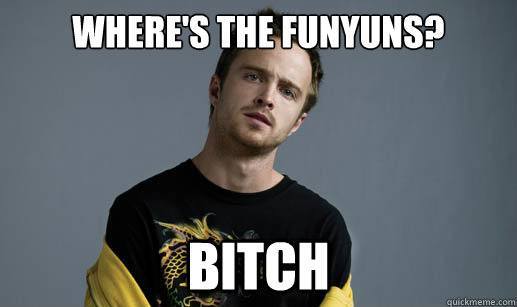 What this salty, chalky culinary nightmare has in common with actual onion rings, we don’t exactly know. If you are a fan of the hit TV series Breaking Bad, you are probably aware of all-around party dude Jessie’s obsession with Funyuns. The only way this could be palatable is if you are on a 3-day meth binge.

A good cake expertly made by a capable chef isn’t actually bad. In fact, a slice often goes great with a good cup of coffee. However, few commercially available cakes fall into that category and drift more towards the sugar bomb class.

Actual tomato soup made from real tomatoes is objectionable enough. But ghetto tomato soup–also known as the “broke ski bum special” is downright nasty. A tepid, unappetizing mix of ketchup and water, this is the stuff that bad trips are made off.

This is one snack that should have stayed on the drawing board. Accurately billed as the “Original Worm Snax” (that’s what it actually says on the package!), Larvets are spicy, crunchy, and totally questionable. We can’t imagine why anyone would want to chow down on these.

If you are the type of stoner whose idea of a good time is breaking a tooth on a bunch of dried corn seeds, those would be right up your alley. It comes in a variety of flavors too, which don’t really do much to make them any more appetizing.

Cheeseburgers are great. Come to think of it, hot pockets aren’t all that bad either. Mutated into this salty, chemically-laden monstrosity however, and we’re just gonna have to pass.

Like cheeseburgers and hot pockets, cheese can be pretty delectable when you’re stoned. Easy Cheese is another matter entirely, and this combination of chemicals, artificial flavors, and who knows-what-else is definitely worthy of inclusion in this list.

Ah haggis… that utterly disgusting delicacy that only a true Scotsman would love. Lovingly made from sheep innards, haggis is pretty hard to swallow as it is. Perhaps unsurprisingly, it becomes even more objectionable when combined with ice cream.

The first two items might be fine as part of a salad, but when you add the two other ingredients…well let’s just say that we’d rather have some of what the inventor was smoking when he thought of this horrific concoction.

On top of a hamburger, American cheese can be pretty good (see cheeseburger). On its own in mass quantities however… it’s enough to make anyone give up smoking weed!