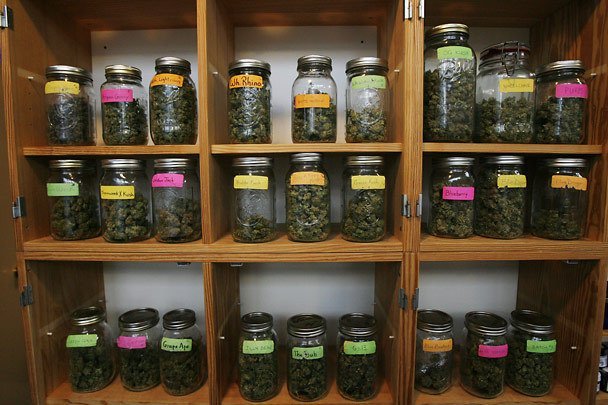 Washington officials say they’re almost ready for the state’s first recreational pot shops to open, and they’ve set an official date: July 8. Now it’s a race to see whether they can meet that goal.

The Washington Liquor Control Board is set to issue the first licenses for marijuana companies June 7. The shops will need 24 hours after that point to enter all their weed in a state tracking program.

Legal pot has had problems in Washington since voters legalized the drug in 2012. The opening date was repeatedly pushed back, there are concerns about the hefty tax on cannabis, and a sizable legal gray area still exists between recreational and medical pot.

Michael Perkins, who plans to open his first recreational shop in Seattle July 8, said such uncertainties could lead to higher prices, especially in the beginning.

“I would assume $20 to $25 a gram until the producers reduce their prices,” Perkins said. “I expect to see demand for the [legal marijuana]. I expect to run out of product. And I expect the people coming to run over and try to get a [medical] card . . . so they can go to a medical store next door.”

That scenario worries many in the industry, as well as some state officials. There are few rules governing medical marijuana in Washington, and lower taxes, so dispensaries can sell pot at bargain prices.

That may be attractive to many of the potential customers of recreational cannabis. If they could obtain patient registration cards, they would have access to cheaper weed.

The going rate for a gram of pot is typically between $10 and $15 on the black market and in many MMJ dispensaries. With so few rules for medical marijuana and an ample black market, some fear cheaper cannabis could undermine legal weed.

But not everyone agrees that price is the most important factor for customers.

“I don’t see it as competition,” said an applicant for a license in Seattle. “I think it’s completely different. Obviously the [recreational] market, at least at this point, you look at Colorado, it’s really geared toward the tourist market. Colorado still has their medical system and their recreational system and they are booming. So I see them as completely different. I don’t think medical and the recreational tourist market are the same thing.”

Even so, another applicant, whose store won’t open Jan. 8, predicted a “bloodbath.” “You have to compete against the medical and black market with super high prices and limited supply,” the applicant said.

The high costs are due in large part to a burdensome tax levy, part of the law passed by voters. Each of the three main transactions in the marijuana process – from grower to processor, from processor to retailer, and from retailer to customer – is taxed at 25 percent.

That burden increases as pot passes through the system. By the time it reaches consumers, the cost has ballooned, and so has the price. Some reports say cultivators are selling to retailers for $5,000 or more per pound (nearly $500 per ounce after taxes), while others have found growers selling for less than $3,000 (about $300 per ounce).

“Our products are all top-shelf, and we are asking $2,800 per pound, and we are asking the retailers we work with to cap their price at $420 per ounce to consumers,” one grower said. “We are avoiding the temptation of price gouging.”

Still, $420 is much higher than the going rate for an ounce of weed. That includes medical marijuana in Washington, perhaps the biggest threat to legal marijuana.