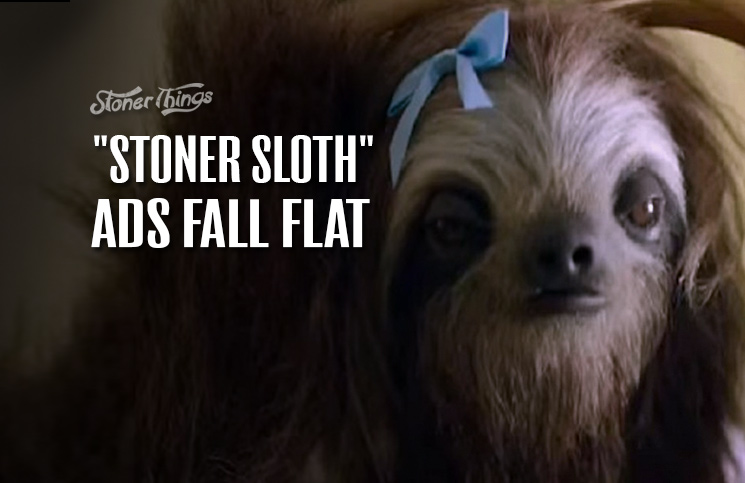 Drug warriors in the United States may be laughably bad at what they do, but their counterparts overseas can be equally ineffective. Witness an attempt by an Australian group to warn youngsters off marijuana. The Stoner Sloth campaign is a transparently bad idea, and viewers have treated it as such. The message, as sold through a series of TV ads aired in Australia, is that cannabis turns young users into lazy, unambitious sloths – literally. An actor dressed in a giant sloth costume is portrayed having a hard time with various tasks after toking.

As American anti-drug efforts go, the campaign is relatively tame. Its message is blown widely out of proportion, but at least it doesn’t try to sell outright fantasy as fact. Marijuana opponents in the United States are notorious for dealing in lies.

But by the standards of Australia or Europe, the ads are downright offensive. Local cannabis proponents immediately criticized the campaign, calling it feckless and overblown.

“(This) doesn’t reflect NCPIC views on how cannabis harms campaigns should be approached”, the National Cannabis Prevention and Information Centre (NCPIC) said in a press release.

Watch a report of the ad campaign, contain clips from adverts, below.

The push also drew mockery and complaints online. #stonersloth briefly became the top trending hashtag on Twitter in December, and Internet wags have created a series of parodies, memes, and Stoner Sloth T-shirts, now on sale.

Some of the nation’s politicians joined in the derision. Mike Baird, premier of New South Wales, tweeted that the video ads are “quite something.” “Just saw the #StonerSloth ads,” Baird said. “Not sure where NSW Gov’s ad guys found Chewbacca’s (sic) siblings, but those videos are . . . Quite something.”

At least one online commentator pointed out what should have been obvious to the activists behind the ads: If Stoner Sloth has any effect on teenagers, he’s likely to encourage underage marijuana use. For some kids, he could be a kind of cute, cuddly, funny marijuana mascot.

Out of touch with youth culture “Really dislike the drug but was a single young person consulted in the making of these stupid ads?” one person tweeted. “Nobody will take #stonersloth seriously.”

Cannabis is illegal for any use in Australia, but the country uses a harm-diversion approach to the drug rather than jailing large numbers of users. The drug is essentially decriminalized. What’s more, Australians have one of the world’s highest rates of marijuana use.

The theme of the ad campaign is “You’re worse on weed.” Producers set up a website, along with videos, GIFS, social media pages, and hashtags such as #fail, #examfail, #baked, #stoned, and #embarrasing (intentionally misspelled).

Stoner Sloth nods off during high school exams, accidentally downs a spoonful of salt instead of salad at dinner, and is used as the out-of-it backdrop to selfies taken by sober students. “When you realize you should have hit the books and not the bong,” the ads say. “Stoned at dinner and the struggle is all too real . . . When your mate turns into ‘that guy’ at the party.”

Some people took to Twitter to ridicule the adverts.

The first thing I thought when I saw #stonersloth was 'how high were the people who made this?'

Not one thing has made me want to blaze up as much as #stonersloth has. Big grinny hugs to the Bairdy one.