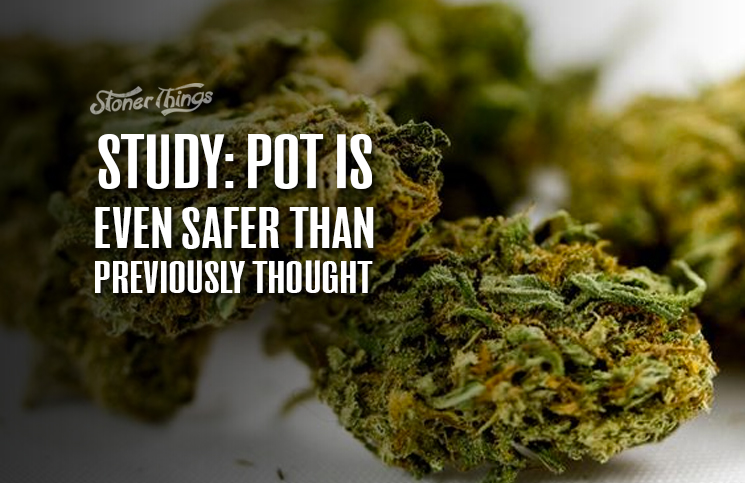 There’s no question marijuana is safer than alcohol and other drugs. This fact has been proved by study after study over the past half century. But now a new study suggests weed is even less hazardous than we thought. Statistically speaking, it’s more than 100 times less dangerous than booze and dramatically safer than any other recreational drugs.

The study examined mortality data from people who used alcohol, marijuana, cocaine, heroin, ecstasy, methamphetamine, or tobacco. Booze, the researchers found, is far and away the most dangerous recreational substance when measured by fatalities and the average lethal dose.

Heroin came in second, cocaine third, tobacco fourth, ecstasy fifth, and meth sixth. Marijuana, meanwhile, came in at a very distant seventh place. That’s partly because the average lethal dose of weed is incredibly high, so much so that a person would have to smoke nearly 1,500 pounds of the stuff in less than half an hour to die.

Alcohol and tobacco cause most fatalities

Alcohol, by contrast, kills roughly 88,000 Americans annually. Heroin is directly responsible for about 4,000 deaths, while nicotine products kill almost half a million people each year.

The lethal dose of nicotine is also very, very high, limiting the immediate risk that comes from smoking cigarettes. But the eventual fatality rate is still much higher for smokers than for drinkers or other drug users.

Because it has no practical lethal limit, cannabis has a mortality rate of zero. It was the only one of the six substances with a low fatality rate.

It’s well accepted, both in the scientific community and in the stoner community, that pot is the safest available recreational drug. Even caffeine carries a risk of death at high doses, though people rarely die from it.

But the new study found the disparity was even greater than previously thought. It reinforces the results of earlier studies that also found pot is safe.

Weed is safer than other substances in multiple ways. Stoners rarely commit aggravated assaults or other impulsive violent crimes; outside the black market, potheads just don’t hurt each other. What’s more, pot smokers are safer on the road – about 12 times safer than drunk drivers.

The scientists behind the study complained that drug laws and penalties are often arbitrary and “lack a scientific basis.” For example, the Controlled Substances Act, a 1970 law that classifies a host of controlled drugs, doesn’t apply to cigarettes or liquor.

Cannabis, on the other hand, is listed under schedule 1, the category reserved for highly dangerous drugs that are likely to be abused and have no widely acknowledged medical uses. Other substances in this schedule include heroin and ecstasy. Even cocaine doesn’t rank as high.

The researches said they support reforms that take “a strict legal regulatory approach rather than the current prohibition approach.” In other words, politicians should try to save lives instead of legislating morality. 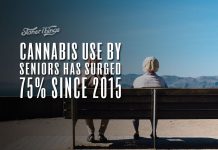 Cannabis Use By Seniors Has Surged 75% Since 2015, Study Reveals