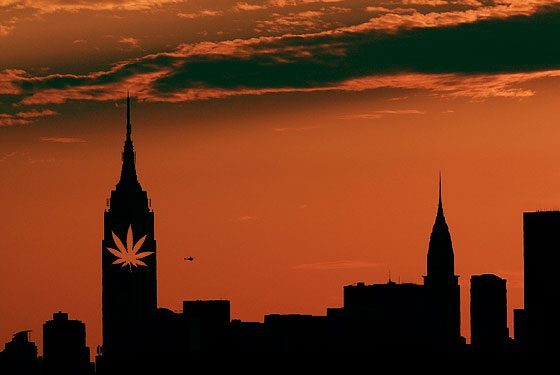 Almost everyone in the State of New York favors medical marijuana, a new poll finds, and a clear majority want to legalize all weed.

The poll, released Feb. 17 by Quinnipiac University, found that 88 percent of New Yorkers want to allow medicinal cannabis, while 57 percent want to make weed legal for recreational use. Just 9 percent oppose MMJ, according to the poll. Gov. Andrew Cuomo announced in January that he would use his executive authority to launch a strictly regulated medical marijuana program that should make medicine available to patients by 2015. That makes New York the 21st state to adopt medical pot, along with the District of Columbia.

Two of those states, Colorado and Washington, have gone even further and legalized all marijuana. The first recreational pot shops opened in Colorado Jan. 1, while stores should open in Washington in the spring.

Under New York City’s long-running “stop and frisk” policy, residents, especially young African American men, were frequently instructed to empty their pockets when stopped on the sidewalk by police. They weren’t legally required to do so, but they had no way of knowing this, and when they exposed their marijuana to police in “public view,” they were charged with misdemeanor possession.

New Mayor Bill de Blasio has launched efforts to reform stop and frisk, and police were already instructed to avoid cannabis busts under such circumstances – but that didn’t stop the practice. State Sen. Liz Krueger has introduced a separate reform effort, a full campaign for legalization, in the state Senate. Cuomo opposes that legislation, which has not been given good odds of success.

February’s poll is in line with results from other parts of the country, where MMJ is incredibly popular and full legalization increasingly so. In Florida, the next state likely to adopt medical cannabis, a poll from November showed a whopping 82 percent of residents favor the idea.

That proposal will be on the ballot in November. If it passes, 22 states will allow medical weed, meaning 43 percent of the U.S. population would live in states with MMJ.

A series of recent national polls showed most Americans back legalization for recreational purposes, while a large majority favors medical weed. Both policies are under consideration in several states over the next few years.