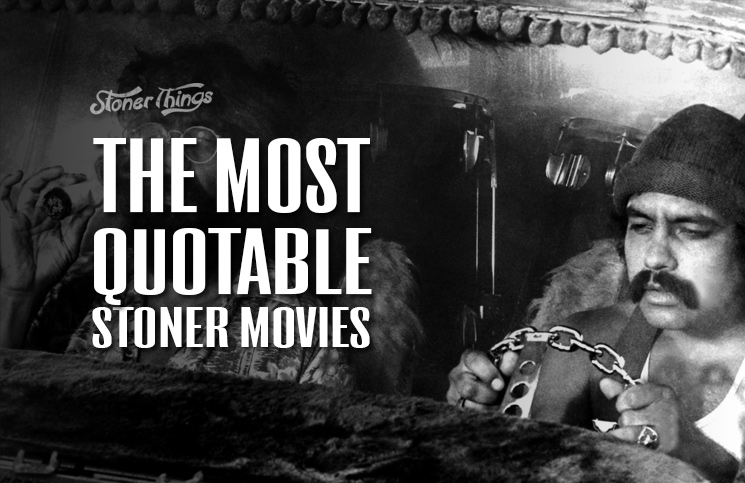 Pothead movies are full of outstanding dialogue about weed and the lifestyle that goes with it. So here, in no particular order, are the most quotable movies featuring dope and the people who smoke it.

Pineapple Express may be the single most quotable stoner movie ever made. The plot centers entirely around pot, so good lines aren’t hard to find. And with James Franco and Seth Rogen on the bill, you know they know what they’re talking about.

Franco: “This is like if that Blue Oyster shit met that Afghan Kush I had, and they had a baby. And then, meanwhile, that crazy Northern Lights stuff I had and the Super Red Espresso Snowflake met and had a baby. And by some miracle, those two babies met and fucked – this would be the shit that they birthed.”

Cheech and Chong set the standard for stoner movies with their classic Up in Smoke. And the quotes are fast and thick. As the pothead duo cruise around Los Angeles, they spout some wisdom for the ages. High school can be great, and it can also be downright awful. Dazed and Confused captures that double-edged sword, and in the process produces some outstanding weed-related lines.

Slater: “Behind every good man there is a woman, and that woman was Martha Washington, man. And every day George would come home, she would have a big fat bowl waiting for him, man, when he came in the door, man, she was a hip, hip, hip lady, man.”

It’s been 12 years and a few more movies since Harold and Kumar journeyed to the home of the greasy Slider. But the quotes they uttered are timeless. When you smoke pot at every conceivable opportunity, you gain some real insight on the subject.

Kumar, in surgery: “Hang on a second, nurse. What we should probably use is marijuana. That’ll sufficiently sedate the patient for surgery.”
Nurse: “Marijuana? But why?”
Kumar: “We don’t have time for questions. We need marijuana now, as much of it as possible! Like a big bag of it.”