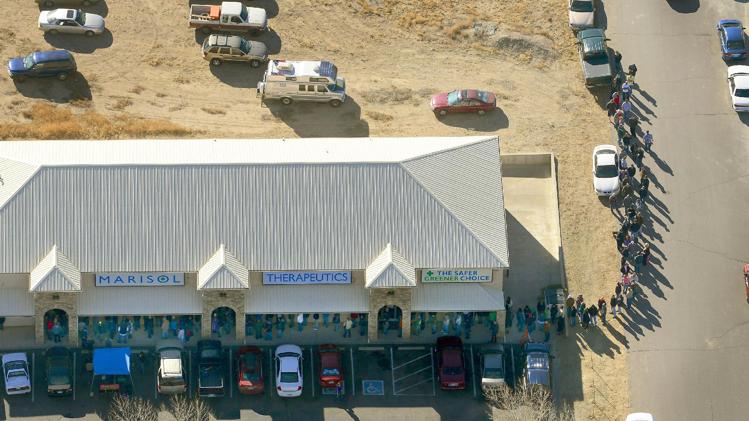 Lines stretched out doors, around corners and down roads. Tokers came from around the state and across the country. And in pockets throughout Colorado, they joined with marijuana business owners to celebrate the birth of a new reality in America: legal pot.

The first retail stores allowed to sell weed in the United States (or, for that matter, anywhere) opened their doors to the public in Colorado Wednesday, Jan. 1. There weren’t many of them, forcing stoners to line up hours in advance, but the air of victory was palpable. “It makes you giddy to say it: I went into a store and bought pot,” said Linda Walmsley as she walked out of the Denver Kush Club.

About 40 pot stores were in business New Year’s Day, eight of them in Denver. Customers armed with nothing more than cash and IDs waited in lines that began forming before dawn, made their way into the stores, & bought the first legal retail cannabis in the world.

Voters in Colorado and Washington State legalized marijuana in the 2012 election. Both states spent the better part of 2013 drafting rules to regulate the cultivation, sale and possession of pot. Stores are expected to start selling weed in Washington in the spring.

Technically, cannabis possession and use have been legal in both states since 2012. In Colorado, adults can grow up to six plants at home. But aside from the state’s medical marijuana program, there was no other way to get the drug legally – only licensed retailers can sell it.

Many of the people who lined up Jan. 1 said they were regular users without medical cards. They bought from dealers or friends in the past but said they wanted to come out of the shadows, even if that meant paying more.

An eighth of an ounce of weed was selling for between $50 and $60, almost twice as much as medical marijuana. Though the price is comparable to black-market pot in some other parts of the country, it’s relatively high for a state that has long allowed MMJ. But shoppers said they didn’t mind.

“People don’t like breaking the law,” said Andy Williams, owner of the Medicine Man dispensary in Denver. “The burden has been taken off them.” State regulators, who kept a close eye on opening day, said everything went smoothly. The state sent eight investigators to check retail licenses, inspect packaging and labeling, and make sure stores were checking IDs. Only adults over 21 are allowed to use marijuana in Colorado.

“So far, so good,” said Ron Kammerzell, director of enforcement for the state Department of Revenue.

Federal authorities stayed hands-off during the day. Weed is illegal under federal law, but the Obama administration announced last year that it wouldn’t interfere with states that legalize as long as they enforce eight federal priorities, such as keeping pot away from kids.

For those who lined up on New Year’s Day, though, such concerns were distant. For many, it was more than a novelty, it was a moment of possibility and great optimism.

“I’m going to frame the receipt when I go home, to remind myself of what might be possible,” said musician James Aaron Ramsey, who drove from Missouri to line up around dawn. Ramsey served a brief jail sentence for pot possession less than a year ago. “Legal everywhere,” he said.